Artifact is card game from Valve, utilizing characters from Defense of the Ancients. It was announced August 8th, 2017 and was released for PC/Mac/Linux on November 28, 2018 and mobile devices in 2019.

The base game costs $19.99 and includes two 54-card pre-made base decks consisting of 5 heroes, 9 items, and 40 additional cards, as well as 10 sealed 12-card packs. Additional 12-card packs will become available for $2 each.

While there are no single-player modes, players will be able to play against the AI. 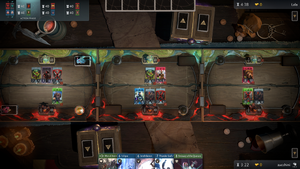 Similar to the MOBA environment it is drawn from, Artifact's combat area will consist of three lanes. Essentially these function as three separate playing boards. These are played from left to right, and can be zoomed into if needed. Within each lane is a tower, and each lane has its own mana pool as well, starting with three and increasing by one mana per turn for player use (Ramp cards can accelerate this). If a tower is destroyed, it is replaced by a more powerful Ancient.

Once combat has cycled through all three lanes, players are then given the opportunity to purchase items with gold they have gained from killing creeps and heroes (at a rate of 1 and 5 per kill, respectively).

There can be up to 100 creeps and summons in a lane. Creeps are summoned at two per turn and vanish upon death.

Cards in Artifact come in various rarities and can be split between hero, item, summon, ability, and improvement cards. At the outset, the game is expected to launch with at least 280 cards (44 heroes). Additionally, cards can be split into type depending on color, with players able to build their decks from two of the four:

Players can have five heroes per deck. Item cards are purchased with the gold earned from killing creeps and heroes; once purchased, they are equipped to a player's heroes. Improvement cards affect the lane or lanes they are cast upon.

Players have the option of purchasing cards directly or through trading/selling on the Steam Marketplace.

As previously mentioned, players may have five heroes in their deck at the start of the game. Three of these are randomly assigned a lane, with the remaining two added during the next two rounds.

Heroes themselves come with active and/or passive abilities, and also have stats - Health, Armor, Attack - which are then buffed by Item cards and other abilities. When a hero is defeated, it will take a single turn to respawn, at which time the player can replay it in any lane. Heroes with the "Rapid Deployment" ability can be redeployed instantly (If killed, return this hero to play at the the start of the next round.).

In addition to the heroes players are already familiar with, new heroes will be added to the game. These heroes will also make it into Dota 2. Lore will accompany heroes in the form of flavor text and/or voice-overs.

After combat ends in the third lane, players are given the opportunity to purchase item cards using the gold they have earned in the match. These item cards are then equipped to the player's heroes, filling weapons, armor, or accessory slots.

Items include those that can buff hero stats and consumables. Additionally, some items, like heroes, can have active and/or passive abilities. The more expensive the item, the more powerful it is.

If a hero is destroyed while wearing items, they will respawn with those items intact.

Players construct a deck made up of 40 cards, 5 of which are heroes, with the remaining consisting of abilities and summons. Copies of cards are limited to three. Cards can only be played in lanes that have a hero of the corresponding color.

Players draw a pair of cards each turn, prior to beginning combat in all the lanes. Players can have any number of cards in their hand and, unlike Hearthstone, there is no ill effect of running out of cards to draw.

Play progresses one lane at a time, from card placement to combat, before proceeding to the next lane.

Once both players pass (after placing all cards, one at a time in a lane), combat begins, with units attacking units in front of them. Direction of attack can be changed with cards and blocker arrows. If there is a lack of units, the attack focuses on that lane's tower; if the tower is also destroyed, the attack proceeds to the Ancient.

A player wins the match when they have killed two out of the three towers (40 health apiece) or have killed at least one tower and an Ancient (80 health).

During Artifact's reveal when it was announced at The International 2017, it received a disappointing reception from the audience when the tagline "The Dota Card Game" came on screen. Many were expecting a game of a new IP when the announcers said there would be a new game from Valve.

During its launch there were over 60,000 players at a time playing Artifact, but has since dropped to less than 1000. The game's price initial price at $20 along with purchasable card packs brought mircrotransaction controversy to the game in comparison to Hearthstone's free-to-play price. The three lane system has also been described as complex and in some cases too-RNG or not enough RNG.[1][2] 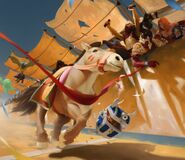 Day at the Track 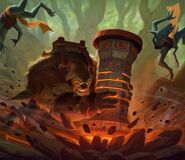 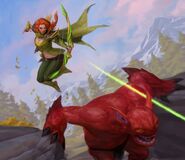 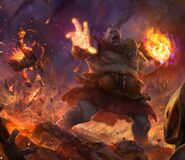 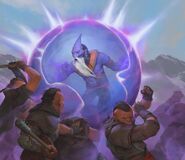 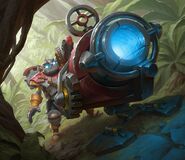 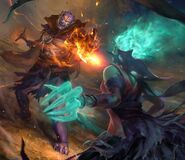 Pick Off
Add a photo to this gallery

Add a photo to this gallery


Cite error: <ref> tags exist, but no <references/> tag was found
Retrieved from "https://dota.fandom.com/wiki/Artifact?oldid=19957"
Community content is available under CC-BY-SA unless otherwise noted.