The sibling rivalries between Lina the Slayer, and her younger sister

Rylai, the Crystal Maiden, were the stuff of legend in the temperate region where they spent their quarrelsome childhoods together. Lina always had the advantage, however, for while Crystal was guileless and naive, Lina's fiery ardor was tempered by cleverness and conniving. The exasperated parents of these incompatible offspring went through half a dozen homesteads, losing one to fire, the next to ice, before they realized life would be simpler if the children were separated. As the oldest, Lina was sent far south to live with a patient aunt in the blazing Desert of Misrule, a climate that proved more than comfortable for the fiery Slayer. Her arrival made quite an impression on the somnolent locals, and more than one would-be suitor scorched his fingers or went away with singed eyebrows, his advances spurned. Lina is proud and confident, and nothing can dampen her flame.

The Slayer is one of the deadlier offensive spellcasters, capable of killing fragile heroes with one combo of her spells. Her two main offensive spells provide a powerful area of effect combo. Dragon Slave fires a quick fiery projectile which deals good damage and has pretty high range. Light Strike Array is Lina's stun spell. Due to her relatively slow cast time it can be difficult to hit moving enemies with this spell, however. Many Lina players cast Light Strike Array right after an ally uses another stun, making the spell much easier to hit and prolonging the total disable time. To support her offensive gameplay style, Lina has a passive skill called Fiery Soul. Every time she casts any of her other spells, Lina gains a temporary movement and attack speed bost, allowing her to chase down and kill fleeing enemies. Lina also has the most damaging single-target spell in the game: Laguna Blade. This devastating blast of energy is one of the best ways to finish off injured enemies. Often heroes who thought they were safe are blasted into oblivion by a single Laguna Blade. 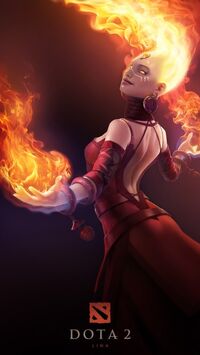 Retrieved from "https://dota.fandom.com/wiki/Lina_(DotA_2)?oldid=19299"
Community content is available under CC-BY-SA unless otherwise noted.