Zeus is an offensive spell caster. His spell damage output is probably the highest of any hero in the game due to a combination of high base damage and short cooldowns. Arc Lightning strikes a large number of enemies simultaneously with a chain lightning; and while it does relatively slight damage, its low cost and quick cooldown allow it to be cast repeatedly during a battle. Lightning Bolt is easy to understand: lots of damage! Offering a good balance of damage, cooldown, and mana cost, Lightning Bolt is Zeus's primary means of dealing with enemies. Every time Zeus casts a spell, his passive Static Field ability delivers a shock to nearby enemy heroes, based on their vitality. As enemies increase their life energy through the course of a game, Static Field does proportionally more damage to them. Zeus's most feared ability is Thundergod's Wrath. When cast, this spell causes a bolt of lightning to strike all enemy heroes on the battlefield. Thundergod's Wrath is especially useful for finishing off injured heroes as they limp away from battle, but it can also give Zeus and his allies an edge in the heat of battle in team fights. 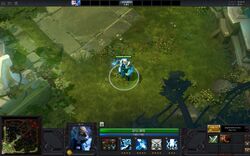 Lord of Heaven, father of gods, Zeus treats all the Heroes as if they are his rambunctious, rebellious children. After being caught unnumbered times in the midst of trysts with countless mortal women, his divine wife finally gave him an ultimatum: 'If you love mortals so much, go and become one. If you can prove yourself faithful, then return to me as my immortal husband. Otherwise, go and die among your creatures.' Zeus found her logic (and her magic) irrefutable, and agreed to her plan. He has been on his best behavior ever since, being somewhat fonder of immortality than he is of mortals. But to prove himself worthy of his eternal spouse, he must continue to pursue victory on the field of battle.

Retrieved from "https://dota.fandom.com/wiki/Zeus_(DotA)?oldid=19631"
Community content is available under CC-BY-SA unless otherwise noted.